The New School is planning to build a $215 million classroom and dormitory building on the corner of 14th Street and Fifth Avenue, but the Painters Union DC 9 is blocking the construction manager’s effort to apply for a market recovery program unique to NYC labor unions that would allow the developer to implement an anti-competitive and costly project labor agreement (PLA).  In NYC, Big Labor has convinced private developers and public officials that PLAs will result in union concessions that will save money.

The cost savings resulting from PLAs have been disputed and questioned, but the real reason PLAs are being promoted by Big Labor is to cut competition from nonunion contractors encroaching on union marketshare in Manhattan and the surrounding burroughs.

For example, here is a quote from a union source on the NYC market recovery program in “NYC Firms and Unions Will Cut Costs To Boost Work,” (McGraw Hill Construction August 2009).

“We have two problems in New York: the financial crisis and creeping nonunionism. This will help both,” said John A. Cavanagh, a former building contractor executive and chairman emeritus of the Contractors’ Association of Greater New York, a BTEA member group.

“To create growth opportunities in the union sector, PLAs are the most valuable tool we have…

…These PLAs, which typically involve modest adjustments on issues other than wages and supplements, can reap huge rewards for the union sector of the industry by assuring that all work from start to finish — including tenant build-outs — will be done union.

We must address our shrinking share of the residential market, particularly in the affordable and low-rise segments, but quite frankly, in the market rate and high-rise segments as well…

In the affordable and low-rise segments, however, we must acknowledge that there are very few projects where union labor, contractors and subcontractors are competitive.  We can, and therefore must, adopt a more aggressive package of wages and supplements to address this sector of work…”

While noteworthy, a Big Labor Boss’ admission that unions are not competitive without the help of special interest schemes that discourage nonunion competitors is not why this story is so salacious.

The painters union has a beef with the construction manager for the New School project, Tishman Construction Corp., because they are using nonunion painters on an Upper East Side condominium project called Manhattan House.  Here is more from the WSJ:

Unionized painters aren’t being used on that project, according to Mr. Coletti and an official with the painters union. A spokeswoman for Manhattan House, which is being developed by New York-based O’Connor Capital Partners, declined to comment.

“Painters Union DC 9 will not sign the project labor agreement until the issue at the Manhattan House is resolved,” Mr. Coletti says.

Tishman is planning to use union painters on the New School project if a project labor agreement is reached, a Tishman spokesman said. But for the Manhattan House project, Mr. Coletti notes that Tishman is the owner’s representative and doesn’t have the power to award construction contracts.

A Tishman spokesman said the company only hires subcontractors who employ union members when it is in charge, but declined to discuss specifics of the Manhattan House project.

Jack Kittle, a spokesman for the painters’ union, said business manager Joseph Ramaglia wasn’t available on Friday. “We do have an issue with Tishman,” Mr. Kittle said, but he added that it was “very possible” that the choice of subcontractors at the Manhattan House was outside of Tishman’s control…

…Construction on the new building may still be able to proceed without a project labor agreement in place—but, potentially, at a higher cost.

Big Labor’s latest underhanded tactic to regain market share in NYC is shocking. The painters union is threatening not to sign a PLA – which would ensure that the New School is built 100 percent union and create a labor monopoly for Big Labor – if the project manager removes nonunion painters from a totally unrelated project.

This reminds me of a classic scene from Blazing Saddles, where the townspeople draw their weapons on the new sheriff.  Sheriff Bart escapes the hostile and gullible townspeople by holding himself hostage and threatening to shoot himself. 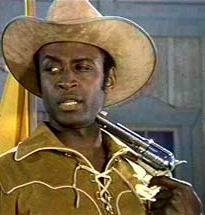 The DC Painters 9 are either too greedy or  too stupid to even attempt to leverage a 100 percent labor monopoly (via a PLA) to eliminate competition and regain lost market share on another project. This nonsensical “I Want It All” behavior has given the labor movement a black eye and crippled local governments with waste and increased costs.

Let’s hope that the NYC public sees Big Labor’s pressure tactics in the same unfavorable light that the rest of the country views wasteful, discriminatory and costly PLA schemes.